I’m so sorry for the lack of an update or a continuation of my life story, but l have been so busy with different things as l am sure you all are. Unfortunately my dear long suffering husband, Jimmy, passed away just two days before Christmas 2008, not long after my last post and as you can imagine this caused a certain amount of disruption at that time. The family decided to carry on as normal over the holiday period and we had a damn good wake in early January.

Things have gradually started to get back to normal and although its been over a year now since my last post, l can assure you that you will now have a different entry every other week, whether short or long. Michael who writes the blog for me has now got some sort of software, whatever that is, which he tells me will allow for quick, easy and

efficient entries. Also l have just had BT Broadband installed which should keep him and the kids happy when they visit, as they are always trying to get onto this internet thingy. Moving with the times is hard for us old timers sometimes but the internet is definitely a big advantage in this day and age for so many things.

Before l move on l will just give you a very quick review of my 2009. The show season started for us in January with Manchester which was the Championship Show, all breeds, it was an average attendance at which my good friend Gerard (Coxgals) introduced his new bitch Coxgal Oiche Angel who became an easy Champion. She went on to win six CC’s with 6 BOB’s and was also placed in a few groups. She was then retired and is now due to reappear at the Major Trophies this weekend where l shall be there to cheer him on. 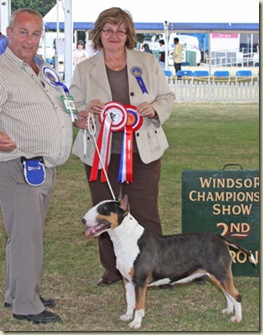 The year continued fairly quietly for me with only one dog to show, more for an interest than with the thoughts of great success. Roddy (Geham Roderick) was effectively the last home bred dog of mine to be shown and my good friend Leslie, who walks Roddy a few times each week travelled around with me to handle him, Michael had given up as he says “he wouldn’t keep his bloody ears up for fillet steak that bloody dog”. My judging appointment of the year was at Southern Counties Championship Show where l enjoyed myself tremendously. My son Peter drove me there and my American friend Scott Ibbitson (Bakerstreet) who was staying with me came along. After the day was finished we came back to the house and enjoyed an internal barbeque as the weather was cold and miserable.

Just to finalise on the Bullies, I have been to several other shows this year as well as Crufts, which l always look forward to even though it doesn’t get any easier at my age. I like to see what new Bull Terriers are coming through and to catch up with old friends. I have finished my term as President of the Bull Terrier Club and am no longer on the committee but l still maintain a very keen interest.

According to Michael, in Ireland if you want to ruin a man you give him a Greyhound. Well this year, he has persuaded me to become a part owner in a few and although the first one picked up a serious injury to its back leg, we have had alot of fun with the other one. As l have said previously Horses where always my first love and my dear mother owned a few good animals with John Oxx snr in Ireland. Bull Terriers have never been great racers so l suppose a Greyhound was the next best thing, the atmosphere at the tracks is very enjoyable, as is the lovely meals you can have while watching the races. The only thing l am not too good at is the betting, but l suppose that is because l bet on every race. Below are a few pics from the year! 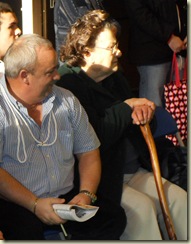 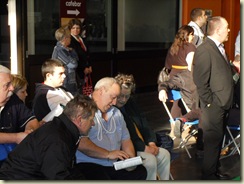 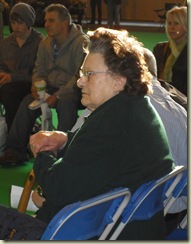 Michael is a busy bee with the camera! 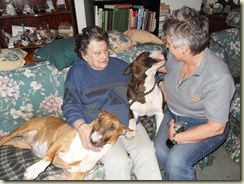 Me, Rosa, Roddy and my daughter Jane. 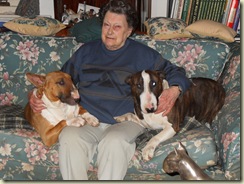 Me and my little darlings. 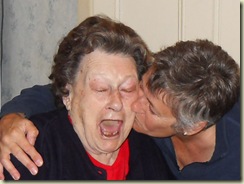 Getting a big hug and kiss after l gave Jane a Speed Driving day as a birthday present. 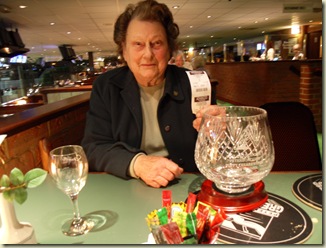 Peterborough Greyhounds with a big Trophy and a rare winning ticket. 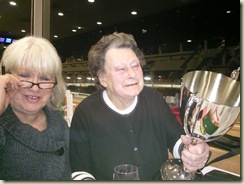 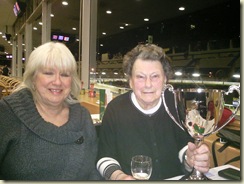 Ok, that’s it for now, don’t hesitate to comment on the posts or ask any questions. My next post will be up within a week, this weekend l am off to the Trophy show, good luck.

Posted by Maureen Bell at 14:20 No comments:

I was born in late 1921, the fourth child in a family of six. We grew up in idyllic surroundings in the North Devon countryside with everything you would expect to find in the way of country life pre. World War 2. From an early age l can remember my parents showing Great Danes, while we played with our various dogs and horses. One of my earliest memories of interaction with animals was riding a fat Shetland Pony which bucked me off frequently, but this did not deter me as l continued my love for horses and ponies for the next ten years. I went on to ride show ponies up and down the country for various owners which unfortunately meant no school until l was 15 which l will cover a later post.

My first encounter with Bull Terriers was due to my mother's hunting friend who bred and exhibited them. At the young age of 11, l accompanied my mother on a visit to her friend's house and can remember my mother pulling up outside the house, going to the door and ringing the bell before running back to the security of the car. I was slightly confused by this but realised soon after that th 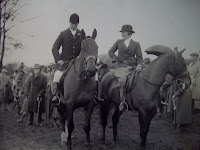 e two White Bull Terriers living within where exceptional guard dogs. After admittance and being shown to the drawing room, movement was not advisable until the owners appearance. My mother was not keen on Bull Terriers as you can appreciate but l fell in love instantly and from that day onwards l helped with their eight Bullies. I spent many happy days with Mrs Channer's (sitting on the right horse)Bull Terriers and knew then that l would only ever want one breed of dog. This would not happen for many years as my mother would not allow one in the house and also l could not afford one. 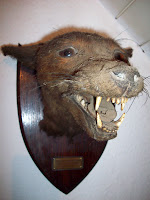 ould go 2 days a week during the winter. Nothing would be thought of leaving on our ponies at 7am in the morning following our mother on a 10 mile hack to the meet. We would hunt for 5 hours and then ride all the way home which might be further than we had rode in the morning and then our ponies had to be rubbed down, fed, watered and put to bed before we could enter the house. My love of hunting and watching hounds working has continued to this day and l believe it was a great loss to countryside life when it was banned a few years ago. At the age of 14 l was given the honour of being blooded by the huntsman, which in them days was like the trophy of the chase and the mask still hangs in my hall (pictured above).

That is all for this installment, and l hope you have enjoyed my first little entry. I hope any Anti hunt people will not be offended by the last paragraph but hunting in my early life was very much a part of country life. Below are some pictures which are all titled. 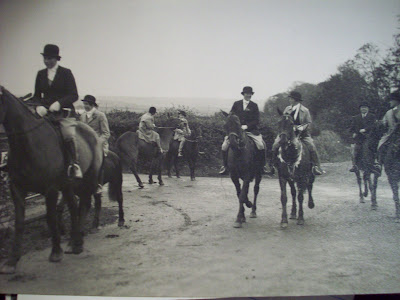 My family riding to the meet with my mother in the middle. 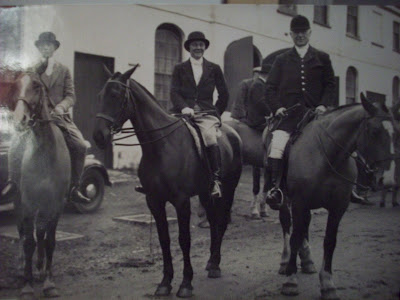 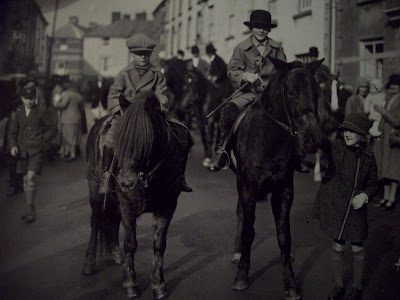 My friend Michael and me. 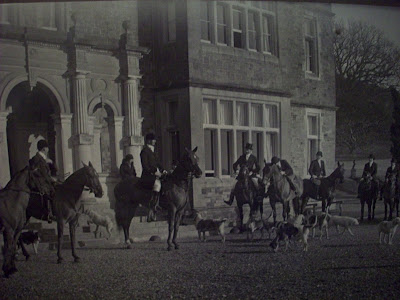 The Hunt.
Posted by Maureen Bell at 13:32 No comments: 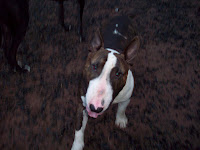 I have only know Maureen for 6 years, a very short period of time in comparison to her many years in Bull Terriers. I started to attend a few shows with her in early 2007, showing her lovely Geham Roderick and l'm sure many have seen me at the various shows around England, now that Roddy is not showing as much l don't go as Maureen doesn't require help with the dogs. The fact that Maureen has nothing to show at the minute won't keep her in the house however and for a woman in her late 80's, she shows an immense passion to attend everything and anything that relates to her beloved breed.
I have persuaded Maureen who many will know is as stubborn as a mule, to do a Blog of her life experience's and what she does now in relation to the Bull Terrier Club, of which she is the President at the minute. Hopefully we will cover many things that all reading will find interesting and as l said to Maureen "anything published in the future on this Blog will be here for life", l have listened to many stories that Maureen has shared with me and l find them amazing. These are memories that should never be lost and surely her experience with these lovely animals is better shared with all Bull Terrier lovers. All post's from today will be in Maureen's words and she will dictate the posts and l will type them up! After she has read the post and is happy, l will publish it and please leave a comment or question for Maureen and l am sure she will reply!

Today we have been to the Bull Terrier Welfare Show at a wonderful establishment for dogs which boasts a Hydrotherapy Pool and several large training areas. Tomlinson's Can 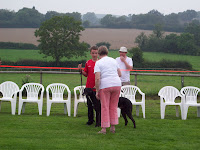 ine Centre is not far from the M1 and is situated between Nottingham and Leicester in a small town called Markfield. To give you a brief insight into Mrs Bell's passion, she gave me no end of grief in order to assure l attended with a few dogs. I eventually broke under the intense pressure and once again ended up having a cracking time with the three dogs l took. Although it rained heavy, we where able to move into the large purpose built hall for the majority of the show. The auction was extraordinary and Ron Scott who was on the mic for most of the day deserved a medal as l think he drew the maximum from the punters pockets. The different classes where run with everyone having fun and the story of one particular little Red Bullie bitch, who was found wandering in the London Underground and ended up in the care of Battersea Dogs reminded us all why we where there supporting these less fortunate animals. This bitch is now re homed and happy with Naomi Kerans! My Greyhounds and ten year old Lab. faired well throughout the day, picking up many prizes, the French Bulldog won Best in Show(the little bugger) which he deserved and other dog that stood out for me was the funny coloured Great Dane Bitch who was gorgeous and picked up Prettiest Bitch. I was disappointed when Maureen who was Judging Waggiest Tale gave first to a white Bullie owned by Ann Cosgrave and Wallace, my Lab. had to settle for second, we where robbed, lol. My highlight was winning the egg and spoon race and after a fantastic day l will definitely return to defend my title next year, all being well. Some pictures are below of the day and finally l would like to thank everyone who made this a great day! 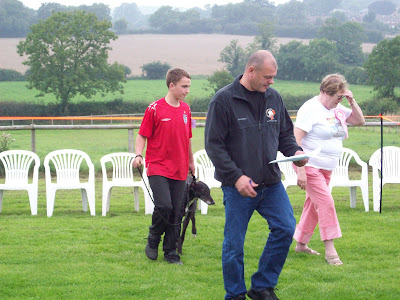 Bradley walks Buddy off after 4th in the Open Dog, the weather was
about to take a turn for the worse. 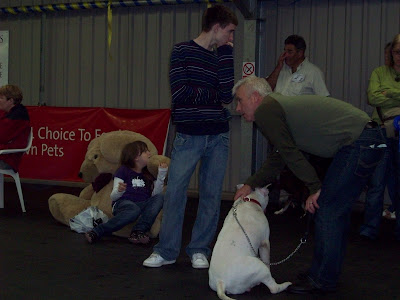 Everyone enjoys the auction! 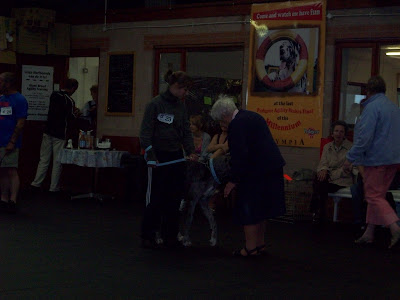 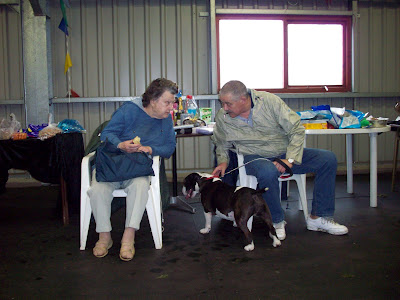 Maureen enjoys the banter and gets ready for a spot of lunch. 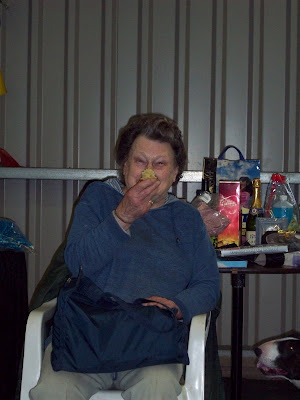 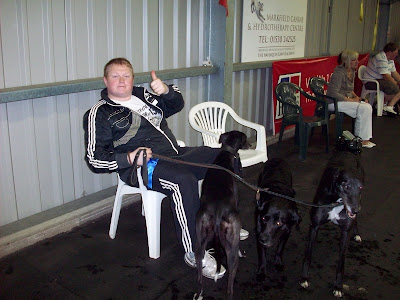 Preparing for the Egg and Spoon Race(limbering up) 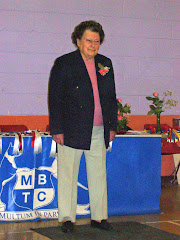